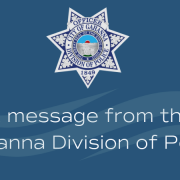 On behalf of the entire Gahanna Division of Police, I wish you all a safe, enjoyable and memory-filled holiday season.  Unfortunately, there are those that will take advantage of the gift-giving season by stealing packages.  Online shopping has increased substantially since the pandemic and so too have the number of reported package thefts.  This crime trend is not new and not unique to Gahanna.  Law enforcement agencies in the region are working together to address this trend.  Please see the attached press release from the Franklin County Chiefs Association for more information and helpful tips to help stop package thefts.

Thank you and Happy Holidays! 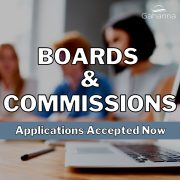 Applications are now being accepted for several Board & Commission appointments. These appointments are made either by the Mayor or City Council.

To submit an application, visit:
https://onboard.gahanna.gov/apply/

Applications for expiring terms and vacant positions will be accepted through November 30. 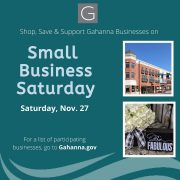 Promotions happening across Gahanna on Saturday, Nov. 27 include but are not limited to 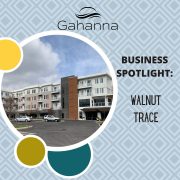 “With more than 60 percent of our citizens being lifelong residents of Gahanna, the need to provide updated and diverse housing stock to satisfy all stages of life is critical. Walnut Trace represents the next tier of housing to support our senior population, allowing for the revolving opportunities of housing that meet the needs of all levels of families here in Gahanna,” said Laurie Jadwin, Mayor of Gahanna.

Situated at 389 Olde Ridenour Road across from the Gahanna Municipal Golf Course, the 4-acre, $21 million campus hosts 93 living units available in one- or two-bedroom floor plans. Residents can relax at the on-site bistro, library, craft room, or fitness center. Walnut Trace was designed for relationship building between tenants, and additional housing perks include covered parking, a convenience store, and nearby access to McCorkle Park.

“With its strategic location near the City’s Creekside area and various recreation opportunities nearby, Walnut Trace will certainly provide a boost to the City’s overall quality of life for our active seniors,” said Nate Strum, Gahanna’s Economic Development Director.

For over five years, the City of Gahanna has been dedicated to bringing a senior living facility into this location. From 2016 to 2019, this district was rezoned specifically to support the immediate, high demand for new senior housing stock.

“The City first changed the zoning code to only allow senior living facilities in this multifamily residential district,” shared Michael Blackford, Director of Planning for the City of Gahanna. “Then in 2019, plans were approved to permit a 93-unit, four-story senior living facility for National Church Residences.”

George Tabit, Vice President of National Church Residences, worked closely with the City of Gahanna throughout the permitting and entitlement processes. Although the housing project investment exceeds $20 million, no economic development incentive programs from the City of Gahanna were used to facilitate the project.

The new property was designed by Berardi + Partners. The construction loan was backed by Heartland Bank, and Elford Construction was the general contractor. 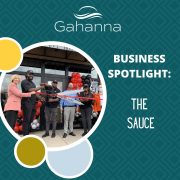 In 2018, Kyler Smith was first introduced to the seafood boil dish made popular in Louisiana. Today, his company, The Sauce Boiling Seafood Express (The Sauce BSE), has rapidly expanded to four locations, most recently in Gahanna this past October. The progression from idea concept to company formation took less than one year, when in 2019, The Sauce opened its first location in Cleveland.

“When I was doing my due diligence to determine a fourth location, everyone I spoke to told me to come to Gahanna. This is the best place to make my business work. It’s near Columbus, and it’s got all the key amenities and data indicators to guarantee success,” explained Smith.

Smith gained local notoriety as a young, Cleveland-area DJ who regularly encountered local celebrities.  However, his family roots in the restaurant industry ultimately influenced his entrepreneurial path. This combination of family-oriented, community-driven support mixed with influential endorsements catapulted his brand to grow rapidly after The Sauce BSE formally launched.

“The seafood boil bowl is a top comfort food. I knew I could make it faster and less expensive than my competitors. That being said, my dishes sustain both flavor and heat – a must in the fast-food industry,” shared Smith.

The Sauce’s menu offers servings in bowls, bags, or pans. All bowls are infused with rice, corn, and potatoes along with a selection from six sauces. While seafood options include shrimp, mussels, crawfish, crab, and lobster, local meat lovers can choose from a trio of sausages – beef, turkey, or pork. The vegan bowl is made with portobello mushrooms, vegan sausage, and vegan sauce in addition to corn and potatoes.

“To be successful, you have to keep your brand in front of people’s faces by doing fun and creative things. Maybe that’s hosting a fun community event with bounce houses or partnering with a YouTube celebrity to promote your food. Either way, it’s all about making people feel good, which is why I also focus on aesthetics. There’s nothing better than enjoying a meal in a refreshing space that feeds your soul, too,” said Smith.

Customers won’t find fried foods at The Sauce, but Smith is looking to eventually add noodle-based meals to appeal to even more taste preferences. To learn more about The Sauce Boiling Seafood Express, visit their Gahanna location at 109 Hamilton Rd. or order online: thesaucebse.com 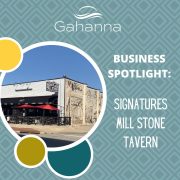 After a long hiatus, Signatures Mill Stone Tavern recently reopened under new ownership. The historic restaurant (located at 94 Mill St.) underwent a total makeover both inside and out, reflecting the ambition and pride of new Owner Sridhar Thumma and his team.

“Everyone at Signatures works together so that we can be the best that we can be. It’s a family atmosphere here, and it’s filled with people who just want to have a good time and let loose,” shared owner Thumma. Special events include live band performances, bourbon tastings, special cocktail creations, lunch specials, and music/entertainment trivia.

Signatures is participating in the 24th Annual Taste of Gahanna that runs through November 11, 2021. A $130 value of food vouchers can be purchased from the Gahanna Area Chamber of Commerce for only $75 at gahannaareachamber.com/taste-of-gahanna.

Follow Signatures Mill Stone Tavern on Facebook to learn about specials and events.  Food service at Signatures is available for dine-in or take-out by phone (614-532-0344). 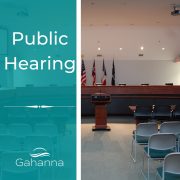 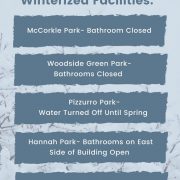 The following parks facilities have been winterized:

Hannah Park- Bathrooms on east side of building open through winter 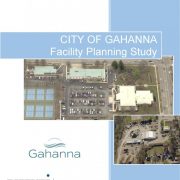 Linked below is the Gahanna Facilities Report, which was presented to City Council on October 11, 2021 during the Committee of the Whole meeting.

Four one-hour workshops scheduled in the near future, to discuss this further with the City administration, City Council and the public. 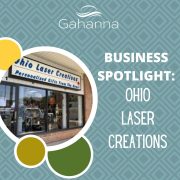 After selling handcrafted, personalized gifts at local fairs and festivals for 20 years, the Chapmans pivoted to running a storefront space in the bustling Gahanna Square plaza in 2019.  Earl’s service in the U.S. Navy aided his transition into a small business owner.

“Just like working the U.S. Navy, I give 110 percent to ensure the highest standards of perfection are met. I wouldn’t give something to a customer that I wouldn’t feel comfortable presenting to a Captain on a ship,” explained Earl.

The Chapman’s insistence on personalized perfection has earned national notoriety. Ohio Laser Creations collaborated with the U.S. White House to craft both wooden emblem seals and leather bag seals illustrating the 43rd president of the United States that are now featured at the George W. Bush Presidential Center. Additionally, Earl’s artwork was featured in the 1996 blockbuster movie Independence Day. Earl designed the Black Knights VMFA 314 patch that was affixed to actor Will Smith’s flight suit.

“Locally, we create awards and emblems for the Army National Guard on Taylor Road in Gahanna. We’ve worked closely with the Army Aviation Support Facility at Rickenbacker Air National Guard Base. In the corporate world, we assist DHL in producing Chester Murphy awards for their U.S. Navy veteran employees,” explained Earl.

The Chapmans are eager to drive more foot traffic into their store, covered in wall-to-wall ornaments, chimes, wooden craft models and other unique gifts. This holiday season, local customers can enjoy collaborating with the Chapmans to design ‘personalized gifts from the heart’, the motto of Ohio Laser Creations. Military discounts are also honored at Ohio Laser Creations.