The City of Gahanna and the Creekside District Alliance announced the launch of the Creekside Outdoor Refreshment Area (CORA) on October 21, 2020.

The CORA was unanimously approved by Gahanna City Council on August 17, 2020.  The CORA gives residents and guests the opportunity to explore the Creekside District while enjoying adult beverages, exempt from Ohio’s open container laws.  Only beverages that are purchased from a participating business within the CORA and that are in the designated CORA cup may be carried within the CORA boundaries.  The boundaries of the CORA are identified in the map below. 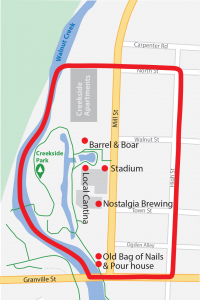 What are the CORA hours?  Where is the CORA?

The CORA extends from Big Walnut Creek to the east side of High St., and from North Street to Granville St.  Operating Hours for the CORA are:

Can I walk anywhere with my CORA cup?

Can I take my CORA cup back inside the establishment in which it was purchased?

No.  Once a CORA cup has left a business, it must be consumed before you enter any other establishment.  This includes reentering the business in which it was purchased or entering a new business.

Can I take an empty CORA cup into a business so I can reuse it?

No.  You must throw away a CORA cup before entering any business.

What types of alcoholic beverage can I have in my CORA cup?

Beer, wine or liquor are allowable in CORA cups.  All beverages MUST be purchased inside one of the participating CORA establishments.

No.  Only drinks purchased from businesses participating in the CORA are allowed.  No cans, glass bottles, or outside drinks are permitted within the boundaries per the laws of the State of Ohio.

Note:  All State of Ohio and City of Gahanna laws regarding public intoxication, impaired driving, and open containers apply to areas both inside and outside of the CORA boundary.  Please drink responsibly.