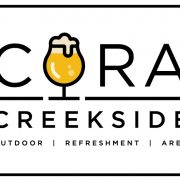 After unanimous Council approval on August 17, the official launch of the Creekside Outdoor Refreshment Area [CORA] went into effect on October 21.  The team at the city worked with the Ohio Department of Commerce Division of Liquor Control to finalize legalities and with the Creekside District Alliance to confirm logistical details around its operation.

Visitors and residents can now take part in the CORA experience, strolling the area between Big Walnut Creek to the east side of High St., and from North Street to Granville St.

Operating Hours for the CORA are: