The 2020 Gahanna Story Trail is now open, inviting visitors to explore on their own the scenic path through the woods at Friendship Park (150 Oklahoma Ave.) while immersing themselves in an original story.

Presented by Gahanna Parks & Recreation, Columbus Metropolitan Library Gahanna Branch and Gahanna Jefferson Public Schools, the 2020 Story Trail tale features the story, “The World Around Her.”   The tale is illustrated on colorful panels that draw visitors into the woods toward the creek.

The Gahanna Story Trail began as a collaboration between the Gahanna Department of Parks & Recreation and the Gahanna Branch of the Columbus Metropolitan Library in the spring of 2012, and was inspired by the Story Trail at Dawes Arboretum. It featured the popular picture book, “In the Tall, Tall Grass” by Denise Fleming. The story served as an interactive nature walk combining nature exploration and early literacy interaction.

In 2013, the project was expanded to begin highlighting more of the Gahanna community. The installations were a unique collaboration between Gahanna Parks & Recreation, the Gahanna Library and the Gahanna Schools.  In subsequent years, the stories, “The Acorn”, “Little Red Riding Robin”, “Following a Feathered Friend”, “Going on a Nature Walk”, “The Friendship Bridge”, “The Littlest Bee”  and “The Big Walnut Country Club” were all written and illustrated by students from the Gahanna Area.

This year’s story was written by: Allison Slates, Areej Khalid, Azhaar Yasin, Ruby Lobert, and  Zakia Mohamud. The artwork was created by: Rachel Deibel, a Gahanna Lincoln High School student.  The illustrations are accompanied by questions and challenges to encourage engagement by visitors as they wander down the scenic park trail. 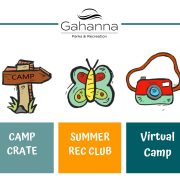